Over at the Kickstarter blog, I interviewed R.U. Sirius about his project to create a collective memory project about Mondo 2000, culminating in a website, book, and possible film project directed by Mondo art director Bart Nagel.

Aside from the Kickstarter project, we also talked about the history of Mondo and its long-term impact, their rivalry with Wired, and the long-lost unpublished issue. He also reveals that Joi Ito bought the $750 reward to fictionally write yourself into Mondo’s history, which is funny because Joi was actually on the masthead.

The full transcript is on the Kickstarter blog, or you can download it or listen below. Back in 1999, my first job out of college was at Gettingit.com, a San Francisco-based webzine edited by R.U. Sirius. I was a total Mondo/Wired/bOING bOING fanboy in the early ’90s, so the opportunity to go work with R.U. was incredibly exciting to me. In a disappointing turn, he was an incredibly nice and normal guy, instead of the hyperactive cyberhippy on mescaline that I was expecting.

I recommend reading Patrick Farley’s The Guy I Almost Was, a classic webcomic that nicely characterizes my impressions of the early ’90s cyberculture scene. (Patrick Farley just ran a successful Kickstarter project to revive Electric Sheep, and R.U. backed it.)

Random trivia: In July 1999, we tried to sell R.U.’s soul on eBay. Here’s the image I made for the auction: 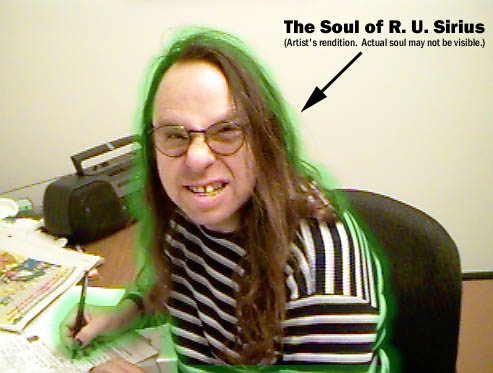 Ahhh, good times, good memories – very pleased to hear about any effort to keep this particular bit of futurehistory alive. I was obsessed with Mondo back in the 90s – there was only one place in my town that carried it, an independent Sci-Fi bookstore where I spent most of my weekends and slacker-job paychecks. Between them, 2600 and Gibson, I was certain I’d glimpsed the lights and darks of the near future, and it looked ominous and wonderful.

It’s probably just as well that much of it didn’t come to pass quite the way they imagined it might, but enough of it permeated the collective consciousness to leave its mark on so much of how we still define art, culture, technology and our overall adorable cyberselves.

God I loved this magazine. Still remember reading the article about the selling of black market celebrity body parts, Ronald Regans’ polyps if I remember correctly. I think I have a few pages in a storage file somewhere.