Inspired by National Novel Writing Month, Darius Kazemi started National Novel Generation Month in 2013, with the goal of writing code each November to generate a novel of at least 50,000 words. The entries are often surreal and playful, and occasionally profound. (See this year’s entries so far, 2015, 2014, and 2013.)

Several of my favorite past NaNoGenMo entries are by a single creator: the multi-talented Liza Daly, the Boston-based software engineer behind World Writable and former CTO of Safari.

In 2014, Liza’s entry was Seraphs, a procedurally-generated codex inspired by the Voynich Manuscript, using a randomized corpus from Voynich, a Voynich-like typeface, the Flickr API, and the Internet Archive’s collection of 18th century illustrations. 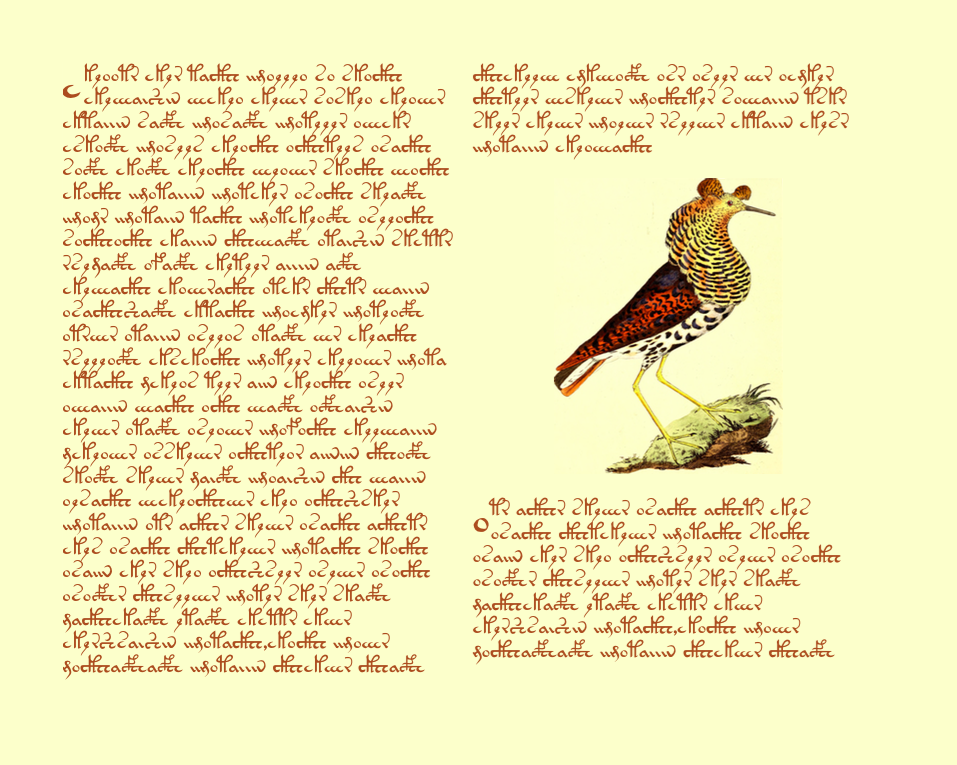 Last year, she created SAGA III, a reimagining of a 1961 MIT computer program that generated scripts for TV westerns, which were then filmed by CBS.

Her first was Trapped in the Q, an infinitely long story styled after the scene in every James Bond movie where Q shows off a series of new inventions and weapons, complete with bad procedural wordplay. (Eventually, Bond dies of thirst while an oblivious Q keeps introducing new gadgets.)

Very clever, but Liza’s second entry absolutely blew me away.

Blackout generates pages of text from a book or newspaper in the style of Austin Kleon’s Newspaper Blackout Poems.

Using Mary Wollstonecraft’s A Vindication of the Rights of Woman as its source, the Blackout code generated The Days Left Foreboding and Water, a 45 page book of blackout poetry. The results are pretty amazing. 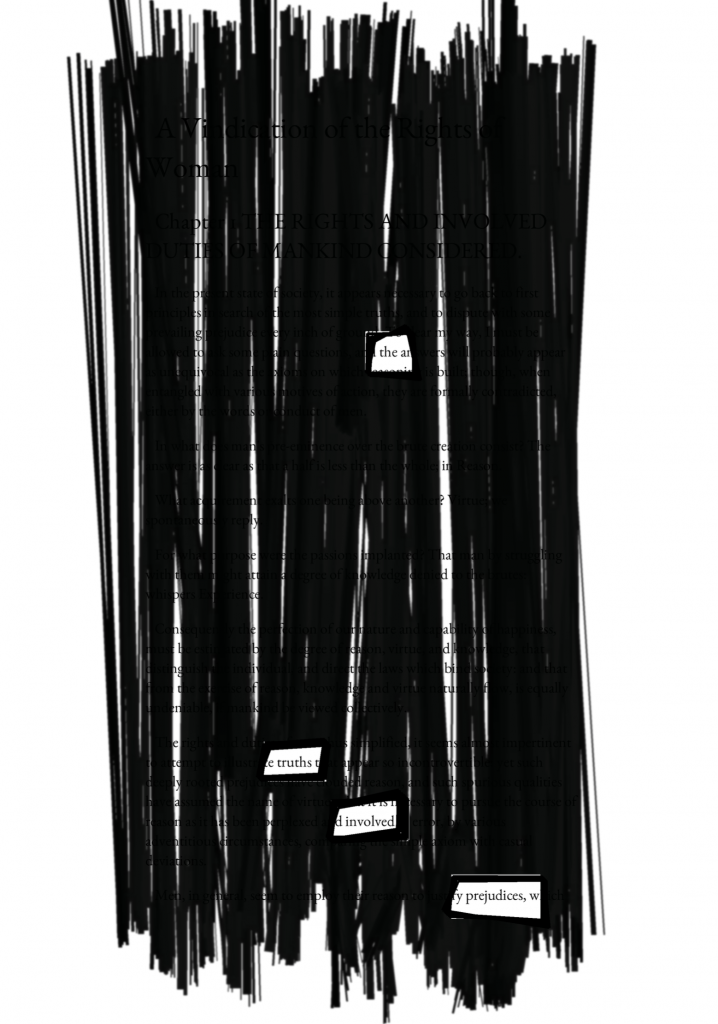 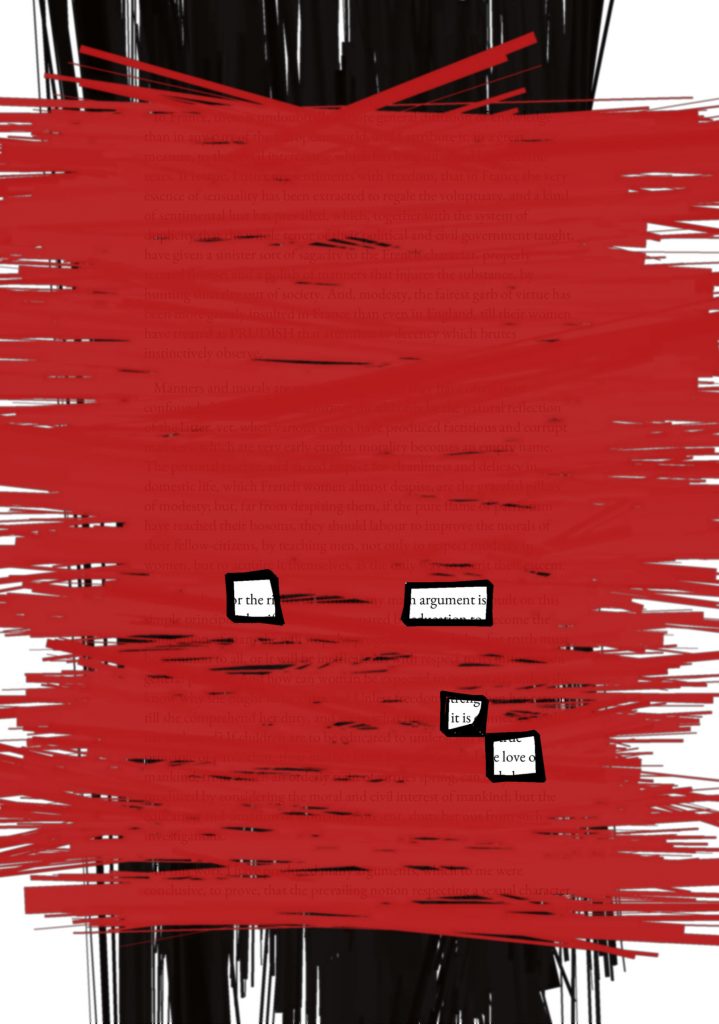 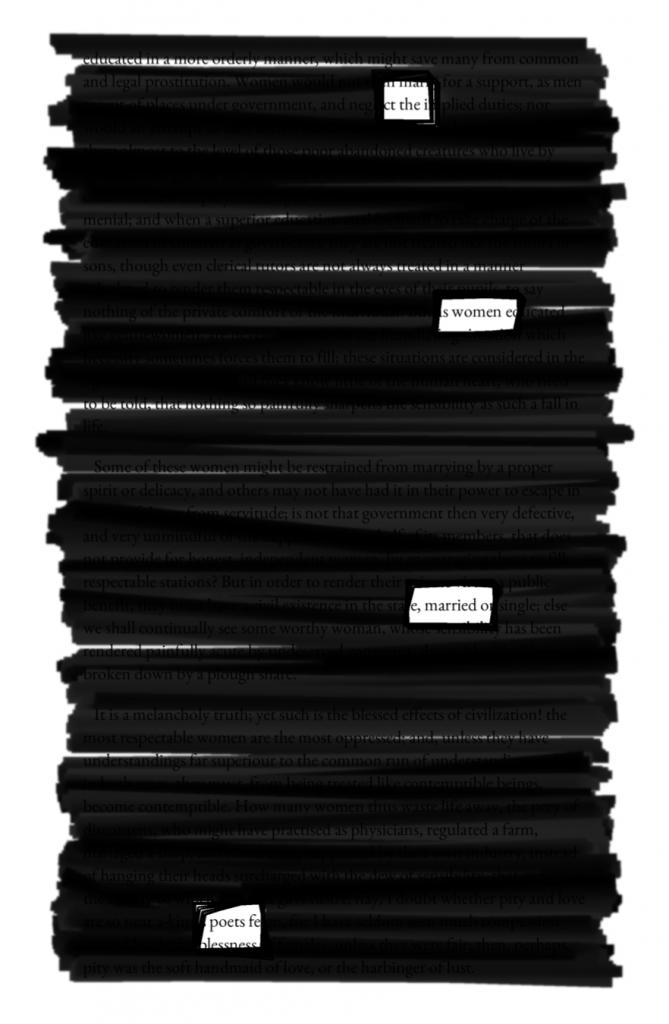 You can download the full PDF here (145 MB). Or, for the committed, the full NaNoGenMo entry—a 9.3GB PDF that’s nearly 10,000 pages long. As Liza says, “You almost certainly do not want to download it.”

One side note: Austin Kleon first started making newspaper blackout poems in 2005, originally inspired by redacted FBI files, but once he started putting them online, he started getting emails and comments arguing that his work was completely unoriginal.

In his TEDx talk from 2012, Austin traced the 250-year-old history of people finding poetry in newspapers. In the 1760s, Caleb Whitefoord started reading across newspaper columns instead of downwards, joining fragment sentences from two different stories into something new. He published the results:

The comet is now on it’s return to the sun—pursuant to a decree of the high court of chancery.

At the meeting at Newcastle, Sir B. F. D. was in the chair—and appeared like a dull, faint nebulous star.

Yesterday there were violent disputes in the common-council—For some time past the volcano has been extremely turbulent.

Which, bringing it full circle, reminds me of Darius Kazemi’s @TwoHeadlines Twitter bot, but made with 1760s newspapers instead of Google News.

There’s still a week left in November. It may not be enough time to write a novel, but plenty of time to generate one. Good luck!