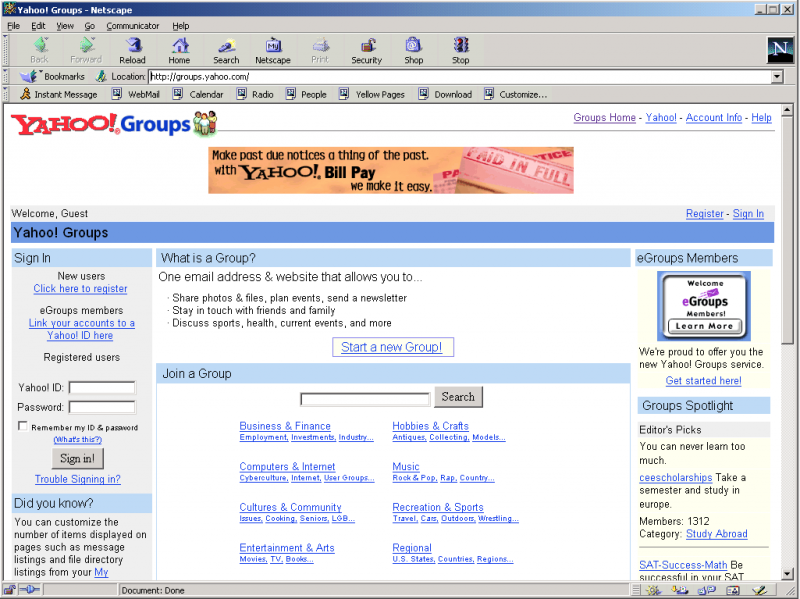 On December 14, everything ever posted to Yahoo! Groups in its 20-year history will be permanently deleted from the web. Groups will continue running as email-only mailing lists, but all public content and archives — messages, attachments, photos, and more — will be deleted.

You have until then to find your Yahoo login, sign into their Privacy Dashboard, and request an archive of your Yahoo! Groups.

For me, it took ten full days to get an email that my archive was ready to download — are they doing this by hand!? — but it appears complete: it contained a folder for every group I belonged to, each containing their own ZIP files for messages, files, and links.

The messages archive is a single plain-text file in Mbox email format with every message every posted to the group. That’s enough for me, but if you wanted, you could import into Thunderbird or any other mail app that support Mbox.

In the late ’90s and early 2000s, I belonged to several Yahoo! Groups (and its earlier incarnation, eGroups) for niche online communities, former jobs, small groups of friends, and weird internet side projects. Until the launch of Google Groups, it was the de facto free way to easily set up a hosted mailing list and discussion forum.

The Archive Team wiki charts the rise and fall of Yahoo Groups, showing a peak in 2006, and rapid fall after that.

Many of these private groups are effectively darkweb, accessible only to members of the group. If you don’t save a copy of the private groups you belong to, it may very well be lost for good.

As you’d expect, the volunteer team of rogue archivists known as Archive Team are working hard to preserve as much of Yahoo! Groups as possible before its shutdown.

Their initial crawl discovered nearly 1.5 million groups with public message archives that can be saved, with an estimated 2.1 billion messages between them. As of October 28, they’ve archived an astounding 1.8 billion of those public messages.

Unfortunately, archiving the files, photos, attachments, and links in those groups is much harder: you have to be signed in as a member to view that content, which requires answering a reCaptcha. If you’d like to help answer reCaptchas, they made a Chrome extension to assist with the coordination effort.

If you’d like to nominate a public Yahoo! Group to be saved by Archive Team, you can submit this form. If you’d like them to archive a private group, you can send a membership invite to this email address and it’ll be scheduled for archiving. More details are on the wiki.

I am trying to save the messages content of a private Yahoo Group I am a member of called “sgtalk”. Today, when I log in to this group, the messages that used to be there are not shown. I had previously gone to a website that was linked from yahoo groups page and asked that my data be archived. I am waiting for the results of that, it has been only four days since I made the request. Is there anything else prudent I could do to preserve message history This group dates back to 2000.

@Daniel: For me, it took ten days before I received my copy of the archive. I’d give it some time. If you don’t hear back from them, it’s still possible that someone else in the group saved the archives.

This was my group I also had a Reiki group but TGCE I had almost 30 experiments. I just returned to get back to my old self when miracles flowed for me, everything was falling into place constantly. I tried to get back and it seems everything is gone!

Did you archive this group?

I searched the Archive Team’s collection for the name of your group, and unfortunately, it doesn’t seem like it was part of the save.

I had *no* idea this was going to happen! Never got any notification from them about my groups that I ran. My group was gibson_alumni. (http://groups.yahoo.com/group/gibson_alumni)

Tried searching but maybe I’m not doing it right. Couldn’t find it. If you could tell me if it’s archived out there, I’d appreciate it.