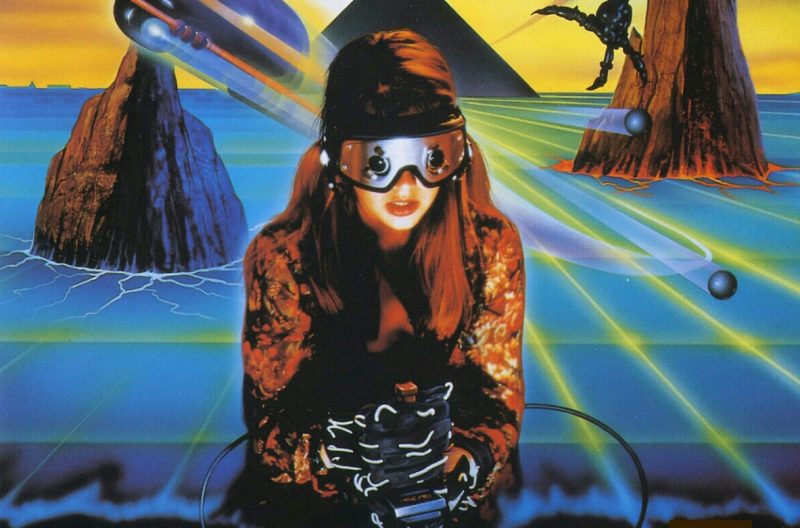 As a connoisseur of crappy movies about technology, I’m a fan of Arcade, the 1993 B-movie where a bunch of kids get trapped inside a Lawnmower Man-esque virtual reality game by a rogue AI.

It’s very ’90s, with a cast including Seth Green, A.J. Langer from My So-Called Life, John de Lancie (aka “Q” from Star Trek: The Next Generation), and the kid who played “Ralphie” in A Christmas Story. It was written by the same screenwriter as Dark City and The Dark Knight trilogy, but you’d never know it.

This far-too-long trailer tells you everything you need to know.

Arcade’s vision of tomorrow is all black bodysuits and skateboards, spinning gyroscopes and gleaming silver skulls, as though it sprung to life from the bored margin doodles of some eight-grader’s math book. That aesthetic, combined with its tinny synth score and panicky PSAs about the corrupting influence of video games, lends Arcade a hint of techno-culture commentary, and thus it arguably holds the same appeal as that whole vaporwave craze that briefly fascinated the internet.

I’ve seen Arcade before, but what I haven’t seen is this bizarre copy I just stumbled across on YouTube, uploaded by an Italian movie distributor. (Their channel is a goldmine of obscure film.)

It was clearly unauthorized for distribution, with “Not for Commercial Use” and a large blurred watermark throughout.

But most notably, it’s missing all music and sound effects, with only the dialogue. This must be some sort of workprint or pre-release screener, never intended to be seen before, but I’m so glad it exists.

Without a score or sound effects, every scene becomes pure cringe, bordering on the surreal, like those Silent Music Video remixes. Dubbed-in dialogue becomes incredibly obvious without other ambient audio in the mix, and awkward silences are everywhere.

The best/worst scenes in this version are with the evil AI, a character creatively named “Arcade,” in the game also named “Arcade.” Here are three example scenes.

It’s strange seeing a version of a movie that was never meant to be seen, and I can safely say I’ve never seen anything like it. The entire workprint is here — enjoy it if you can. (Content Warning: The film has subplots involving child abuse and a parent’s suicide.)