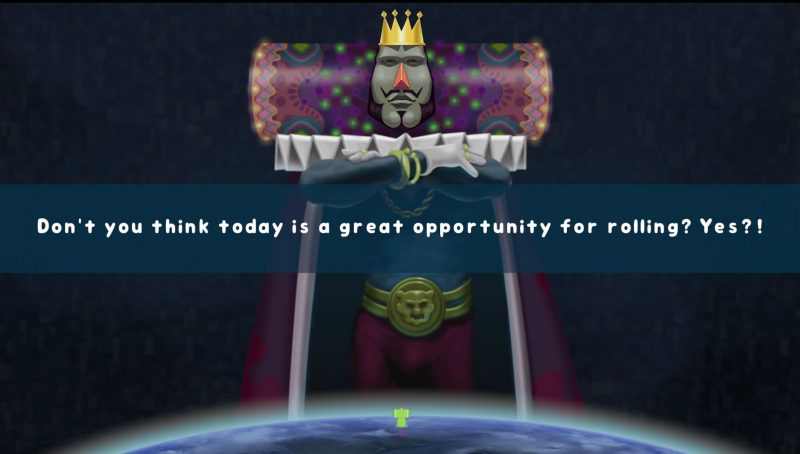 In October, Boss Fight Books published the latest in their eponymous series of books dedicated to video games, this one covering the creation and impact of Katamari Damacy. 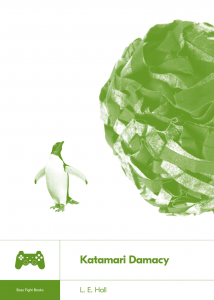 The author, L. E. Hall, is a friend and local game designer, the creator of Portland’s first escape room and recently opened The Wandmaker’s House, an immersive photo and game pop-up that I loved. I was lucky enough to follow the development of the book from its announcement in 2016, to its printing and publishing in October.

I first heard about Katamari in February 2004 before its release in Japan, and was mega-hyped to seek it out at E3 in 2004, four months before its U.S. release. When I saw that lone cabinet tucked into the back of Namco’s booth, I fell in love instantly and named it Best of Show.

But having finished the book, it’s remarkable that Katamari got made at all.

Namco was creator Keita Takahashi’s first job in the game industry, and he very nearly wasn’t hired. In Hall’s book, Takahashi talked about how he was openly critical of Namco’s existing games, and said so during the interview process. The artists loved him, but the executives weren’t convinced.

“Actually, I found out the funny truth after I joined Namco, from an HR guy who I got along with,” Takahashi said. “I failed the last job interview for sure. Sounds like some executives didn’t like me. But one of the interviewers from the artist interview persuaded an executive who was his boss to hire me. So I asked him, ‘Why?’ He said, ‘You looked very unique, and I felt there was potential to make something fun with you.’”

When he came up with the concept for Katamari, his boss was on board, but there was no clear path for the art departmenrt to pitch games.

“I talked with [Mitsutoshi] Ozaki-san, my boss, about how we should move this idea forward to an actual internal production,” Takahashi said. “Usually game ideas were proposed from the game design department at Namco, but we both worked in the art department. Also, technically Ozaki-san was not my actual boss at that time. He had moved to another department, so I had to talk to my current boss about my idea first—but he was not a manager of game designers, he was a manager of artists. He seemed to not have a bad impression of my idea, but he couldn’t make a decision about the game itself.”

The game ended up getting made through Namco Digital Hollywood Game Lab, a “six-month course designed to help developers learn skills necessary for creating games for the PlayStation 2.”

Each successive prototype built excitement internally, but Takahashi had to continually fight for his singular vision, finally securing a budget to make the game.

Even after its Japanese release, Namco wasn’t planning an English translation or American release until Takahashi was asked to appear at the Experimental Gameplay Workshop at GDC 2003.

Darius Kazemi was in that audience that day. He wrote that “the feeling in that room when Keita showed Katamari was just electric. It was amazing to see all these game developers, literally the best of the best in the world, in complete awe of this weird little game. At the end of the presentation, when he said there were no plans to port it to the US market, everyone was just devastated.” As Takahashi and the fans would soon learn, the excitement generated by that presentation was enough to move mountains.

The buzz from that appearance led to Namco bringing Katamari and its creator to E3 in 2004, where I played it for the first time. I bought it on its U.S. release day on September 22, 2004, and like so many other people, was delighted by a game that’s truly unique.

Through interviews and original research, Hall’s book explores the creation of the game and how its concept, visual design, gameplay, characters, and cult soundtrack all evolved. I particularly loved the sections on how Portland-based software developer Panic came to be the exclusive producer of Katamari merchandise, and the cultural context behind the King of All Cosmos’ transgression of traditionally masculine gender roles.

If you’re a fan of the original Katamari Damacy, this is a very good month for you. In addition to Hall’s book — which I wholeheartedly recommend buying direct or through Powell’s or Amazon — the original game was just re-released as Katamari Damacy REROLL for the Switch and PC, remastered in HD for the first time.

And while Panic’s no longer selling shirts, there’s a bunch of new Katamari merchandise newly available through Fangamer, including this double LP of the soundtrack on vinyl.

God I love those Panic shirts. As is always the case, I desperately wish I got extras to… I dunno… keep pristine forever?

Funny story, I was wearing the yellow Panic shirt with the black fuzzy prince on it in Odaiba on my honeymoon in 2009. Some nice people approached my spouse and I and asked us where the shirt came from. Turns out they were some of Cabel’s friends on vacation and were just curious whether someone was making knockoffs of the Katamari shirts. We assured them otherwise.

After going our separate ways we saw what we thought was a dead cicada on the ground but it flipped out when we poked it. Overall it was a very exciting day.