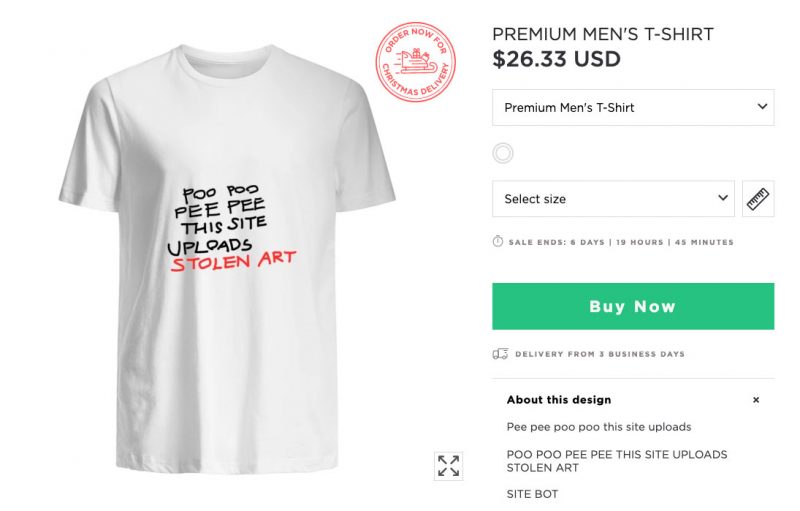 Yesterday, an artist on Twitter named Nana ran an experiment to test a theory.

Their suspicion was that bots were actively looking on Twitter for phrases like “I want this on a shirt” or “This needs to be a t-shirt,” automatically scraping the quoted images, and instantly selling them without permission as print-on-demand t-shirts.

Dozens of Nana’s followers replied, and a few hours later, a Twitter bot replied with a link to the newly-created t-shirt listing on Moteefe, a print-on-demand t-shirt service.

Several other t-shirt listings followed shortly after, with listings on questionable sites like Toucan Style, CopThis, and many more.

Spinning up a print-on-demand stores is dead simple with platforms like GearBubble, Printly, Printful, GearLaunch (who power Toucan Style), and many more — creating a storefront with thousands of theoretical product listings, but with merchandise only manufactured on demand through third-party printers who handles shipping and fulfillment with no inventory.

Many of them integrate with other providers, allowing these non-existent products to immediately appear on eBay, Amazon, Etsy, and other stores, but only manufactured when someone actually buys them.

The ease of listing products without manufacturing them is how we end up with bizarre algorithmic t-shirts and entire stock photo libraries on phone cases. Even if they only generate one sale daily per 1,000 listings, that can still be a profitable business if you’re listing hundreds of thousands of items.

But whoever’s running these art theft bots found a much more profitable way of generating leads: by scanning Twitter for people specifically telling artists they’d buy a shirt with an illustration on it. The t-shirt scammers don’t have the rights to sell other people’s artwork, but they clearly don’t care.

Once Nana proved that this was the methodology these t-shirt sellers were using, others jumped in to subvert them.

Of course, it worked. Bots will be bots.

For me, this all raises two questions:

The first question is the hardest: we don’t know. These scammers are happy to continue printing shirts because their identities are well-protected, shielded by the platforms they’re working with.

I reached out to Moteefe, who seems to be the worst offender for this particular strain of art theft. Countless Twitter bots are continually spamming users with newly-created Moteefe listings, as you can see in this search.

Unlike most print-on-demand platforms like RedBubble, Moteefe doesn’t reveal any information about the user who created the shirt listings. They’re a well-funded startup in London, and have an obligation not to allow their platform to be exploited in this way. I’ll update if I hear back from them.

Until then, be careful telling artists that you want to see their work on a shirt, unless you want dozens of scammers to use it without permission.

Or feel free to use this image, courtesy of Nakanoart.

So since these art-stealing bots are tracking your text and not reply images, I made this for you guys!

If you want something from ANY creative made into a shirt, you can use this image to tell the artist you want to buy it. So you don’t need to type it out ❤️ pic.twitter.com/E9Mn2GILcb

Nearly every reply to the official @Disney account on Twitter right now is someone asking for a shirt. I wonder if their social media team has figured out what’s going on yet.

I know I shouldn’t buy them, but some of these copyright troll bait shirts are just amazing.

Spread the word that there are many ways for artists to live and act creatively to protect ourselves from being exploited by those who presume we have no rights and that our livelihood is free for the taking. This is only one example, even more effective as a collective effort for the benefit of everyone.

Teechip is owned by OOShirts, inc. they’re Customer Service Manager is Valerie Thompson. She is also the Customer Relations Manager for Scalable Press (another company that does this thievery). Their number is 1-877-752-9060. Blow them up. Find all those companies BBB and ruin them!!!

I really want this text on a T-shirt!

Here is Mai Tran showing people how easy it is to upload copyright protected and trade marked images of Snoopy to Teechip. https://www.youtube.com/watch?v=IuKTF3ar8-4

I couldn’t resist! Anyone having issues with these pirate sites stealing from them we are a group of friendly artists that have joined forces to fight online piracy. Join our Facebook group Pirate Busters https://www.facebook.com/groups/653847901780231/
https://www.goplayershop.com/view/1276/this-site-sells-ripped-off-designs-do-not-buy-t-shirt

This is awesome.
I deal with DMCA takedowns of my artwork everyday this is great