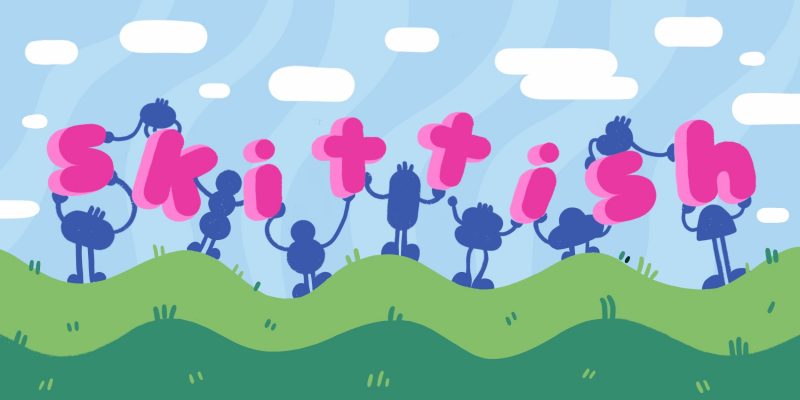 For the last few months, I’ve been quietly working on a brand-new project and it’s killed me to keep it secret, but I can’t keep it bottled up anymore—partly because I need your help.

Today, I’m announcing Skittish, a playful virtual space for online events. Skittish brings people together into a game-like interactive 3D environment that’s designed from the ground up for socially-driven events, big and small.

With Skittish, I’m trying to make a space that supports the kind of events that I love to organize and attend: creative, experimental, and deeply social.

After the pandemic cancelled XOXO last year, I started attending a bunch of virtual events, mostly out of boredom and longing for connecting to other people.

Unfortunately, many of them were pretty uninspiring, basically just fancy webinars with breakout rooms for Zoom. Others were just livestreams with little room for social interaction beyond a global chat room.

Almost all of them left me feeling like I’d either sat through a long meeting or watched a long YouTube video. Was this even an event? Did I actually attend anything?

As depressing as most virtual events were, there were three bright spots of creative experimentation happening over the last year:

There are some amazing projects out there, but I started outlining a hybrid of these ideas: an online event venue for large-scale gatherings that used spatial audio, didn’t assume people were comfortable being on camera, with real-time customization of the space, and built in a 3D engine for a more immersive game-like feel.

More than anything, I wanted it to be optimized for fun: interesting to explore on its own, make new friends, and a vibrant place for creators and event organizers to bring together their communities in a new way.

Grant for the Web

As I was working on the first prototype, it was clear this was far more than a side project, and I’d need additional resources to fund development and design.

Desigan Chinniah encouraged me to apply for Grant for the Web, a grant fund he co-created with Coil, Mozilla, and Creative Commons to finance projects pushing forward an open standard for monetization on the web.

So, last June, I submitted a grant proposal to build a “virtual venue for playfully-immersive events in the browser,” in which attendees can financially support creators, organizers, and events they love using the Web Monetization API (or traditional payment methods, of course).

Three months later, I found out I received their flagship level grant. By early November, I received the funds and was able to bring on a contract developer to help out.

In December, I scrapped my initial Three.js prototype and worked with creative technologist Mike Bodge to build a proof-of-concept prototype in react-three-fiber, a powerful React renderer for Three.js, with a thriving community and helper libraries. Unfortunately, existing client work took Mike off the project a month later.

Through his work on react-three-game-engine, a budding game engine for react-three-fiber, I found Brisbane-based developer Simon Hales, who started working with me on Skittish in January. He hit the ground running, adding much of the functionality you can see in the current app.

It’s still early in development, but this is what Skittish supports so far:

Special thanks to Sam Buttrick, who created the banners and profile images you can see on social media and at the top of this post. Sam’s a Portland local, a recent PNCA grad, and I loved her work on Instagram so much, I approached her to create some illustrations for this announcement. Go hire her!

So that’s what I’m working on! I hope to start running events in Skittish in the next couple months, and opening it up for other people to use for their own communities. In the meantime, I’m currently looking for some help.

Beta Testers. I need a group of willing trusted beta testers to show up once in a while to help load-test, spot performance issues, and give feedback as we build out features. You’ll get work-in-progress previews along the way, and help shape what Skittish becomes. If that sounds interesting, sign up for the mailing list to get notified.

Creators. I’m intent on making Skittish into something that individual artists and creators can use to bring together their own community, whether it’s debuting a new video on YouTube, doing a book reading, a live concert, or playtesting a new game — and make money doing it. If that sounds like something you’d be interested in, get in touch.

Event Organizers. After having co-organized seven years of XOXO, I empathize with the plight facing event organizers right now who are struggling to convince attendees and sponsors to pay for lackluster events. I want to make events that are unique and valuable, worth the time and energy to show up for, and worth paying for, so you can continue to support yourself doing what you love. If you have an idea for an event you’d like to run in Skittish, I’d love to hear it.

Environmental Artist. I’m looking to immediately hire a freelance 3D environmental artist to help design a space for everyone to explore, somewhere between a festival grounds and Disneyland—warm, approachable, and playful. Candidates will be comfortable working in flat-shaded low-polygon constraints optimized for the web. Aesthetically, I’m inspired by games like Alba, WATTAM, Untitled Goose Game, Ooblets, Windosill, Donut County, and I Am Dead. If that sounds like you, email me a link to your portfolio. Introductions welcome!

I was just thinking about how back in the day we’d have this huge events inside of MMORPGs. It was super silly but FUN as hell and really felt like connecting with people. Looking forward to being able to play with this in the future.

Just signed up to help. We’ve been running Foo Camp virtually with discord and Zoom.

The name and design concept here are already SO GOOD. I hope you can run off with this into the sunset. Just wonderful.

this looks like a fun way to do some virtual training as well – I lead a couple Boy Scout groups and programs that are getting burned out on Zoom meetings as we can’t meet in person yet. Having a fun way to have groups come together and apart in a virtual world for discussions and training looks promising.

We have the content for academic conferences and we are looking for ways to allow delegates to connect in a meaningful way. This could be it.

I’m really interested in exploring tabletop gaming within this space. This is not a pitch for early access, just giving feedback that I dig what you’re making!

I’d reach out to some of the streamers on reddit public access network (r/redditsessions). That’s little clunky and some of the DJs or bands could be fun on this platform.

Good luck – we invested in something that looked similar in 1999 called LiveCommunities, sometimes, I’m a little ahead of the market w/my investment thesis 🙂

Love this exploration. I have a small-scale use case: I’d love to watch movies with my family (3 – 8 households) over Skittish. That’s not an event per se, but we’ve been looking for a more social way of watching across generations, across households. The whimsy of this would be a real benefit over the text-based systems we’ve been trying.

There are a bunch of great projects out there specifically to address the “watch together” scenario. You can use Discord with friends for this and it works surprisingly well, but there’s also Teleparty (formerly Netflix Party), Scener, and Kast, among others.

Nice!
I accept that everything is public, but you’ll soon want a way to filter out trolls and (mark) objectionable material.
Is there a map or key, and schedule?
How & when would I find Foo Camp? E.g. Sunday night, head north by northwest through the forest?

It’s not a one-size-fits-all persistent world: every creator starts their own event, which would have its own attendee list and customizable spaces, separate from any other event. Tools for handling abuse and harassment are an extremely high priority, allowing individual attendees, organizers, and our own team to handle issues quickly and responsibly.

Hey Andy,
Since the pandemic I’ve been consuming alot of live streaming and watched how proximity chat has elevated certain social games and events for participants to interact in a different way. Of course I find out you’re involved in making your version as well. Great job as always and love to see where this goes going forward.

Love this! Working for a school district, I’d love to test this out with teachers and students.

I’m so interested in this. Thank you for working on it and sharing it! I pointed !!Con to it because I think they might be particularly interested. I’m also thinking about this in the context of:

Thanks, Sumana! I’m very curious to see how Skittish works for live comedy.

You mentioned funding from Mozilla, is this at all related to the similar Mozilla in-house Hubs project?
https://hubs.mozilla.com/

No relation to the Hubs project. The funding wasn’t from Mozilla specifically: the Grant for the Web program was founded and led by a company called Coil, working in collaboration with Creative Commons and Mozilla.

Thanks for the walk-through. Really enjoying this approach.

Best of luck with that project, Andy! Looking forward to hearing more about Skittish’s progress 😊